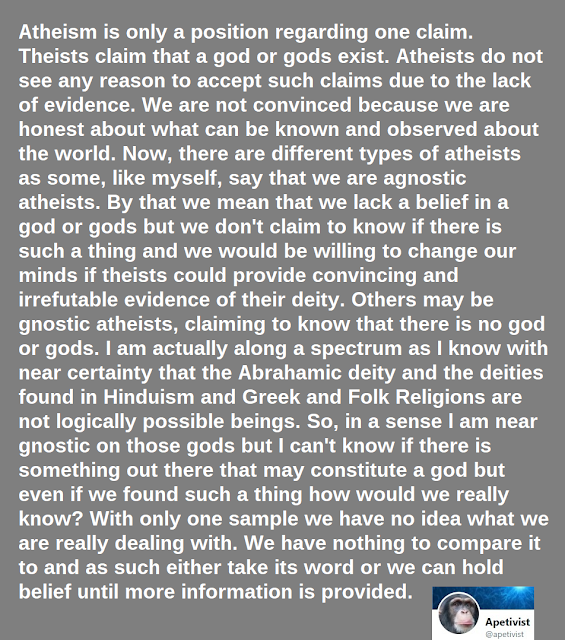 If there is a god or gods and he/they/she/it wants me to believe in it then it has done a really poor job of convincing me that it exists. It is hilarious that Christians and Muslims threaten unbelievers with Hell or tell us that there is no justice. We make our own justice and we always have. It may be finite in its scope and isn't by any means perfect but it does a good enough job to deter a lot of chaos. Sometimes there is no justice and that is a hard fact to swallow but to wishfully think that there is some divine afterlife justice such as Hell is ludicrous. Infinite punishment for finite crimes is beyond barbaric. If for some reason I discovered that the Bible god was real I would certainly not worship it nor would I respect it. If there is such thing as a god or gods I think its quite clear that they are disinterested with human affairs and human and animal suffering. In such a case I wouldn't care and have no respect for them either.

The existence of evil/suffering is to me a strong indicator that there is no such thing as an omnibenevolent god or gods. Spend a day in a children's cancer ward and tell me just how wonderful your god is. Consider the massive loss of innocent life daily and the extreme suffering from diseases and injuries. Senseless suffering serves zero purpose and only adds misery and great pain. There is nothing good about it. We can all learn good lessons in life without suffering. If there will be a New Heavens and Earth as spoken of in the Bible then that means that it wasn't impossible for the Christian god to know how to make a Universe where there will be no suffering and where beings can freely choose to be loyal and loving toward this god. Why would an omnibenevolent god chose the mid experience of suffering and evil leading to lost souls going to eternal torment when he could have skipped to the end and only had the elect exist? It makes zero sense why an omnipotent, omnibenevolent, and omnisapient god would plan to do otherwise. The Christian god (and by extension by the same principles) is an illogical being (if it exists) and is unworthy of an ounce of my respect much less adoration.

Posted by Apetivist at 1:51 PM